The morning began like a Dad’s Army sketch and I almost heard Corporal Jones calling ‘don’t panic, don’t panic’ as I frantically searched every room and cupboard in the house for my boots.  I decided to look in the recycling bin as a last resort (don’t ask), and there they were.  Having checked for vermin and noted that they smelt no worse than normal, I was ready for the off towards the coast.  Disaster had been narrowly avoided, as the bin was collected the following morning.

Arriving at Hartley we found the sea as still and calm as a mill pond, and the close in Bottle Nosed Dolphins showed very well.  A blue phase Fulmar was soon spotted close to the cliff edge.  The last one of these I had seen was on a Martin Kitching pelagic and as a coincidence one of his tours was on the sea today.  We had a short walk and there was not a hint of wind.  Other birds seen included large rafts of Guillemot and Razorbill, Red Throated Divers, Common Scoter, Eider Duck, Cormorants and Gulls.  There was some thought that a distant skua was a Pomarine Skua, but we weren’t certain.  Oystercatchers were heard, Curlew seen and the Golden Plover had amassed on St Mary’s Island. 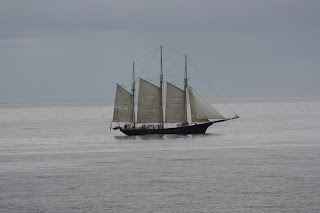 What really caught the eye today, and the eye of several others, was the two Tall Ships leaving Blyth harbour.  Sam managed to find their names on his app, the second one was the Blue Clipper, a three masted gaff rig schooner, which has ten sails with an area of 675m².  It was built in Sweden in 1991.  This was the ship that really caught the eye.  It was a stunning sight and would have been even more stunning had the upper sails been raised, but as there was no wind that was going to be unlikely.

My mind wandered back to my teenage years when I was a crew member on a rather smaller, but no less exciting sailing ship of the name Equinoxe, a 60ft gaff cutter.  I’d won a place as a crew member through a Daily Mirror competition and we embarked from Hamble, Hampshire, and visited Yarmouth on the Isle of Wight, Alderney and Cherbourg, France.  During the evenings we were able to visit the flesh pots of each place, well, we did spend one evening at a disco at Cherbourg.  I have no recollection as to how we found that but I do remember enjoying French fries earlier in the day.  One special bit of excitement occurred on our return in the dark at Alderney when the anchor began to drag which nearly had us floating out of control into the Channel.  I had no real interest in ornithology as a teenager so may have missed some good birding during the trip.  I wonder what the years have brought the other crew members.  Happy days and innocent fun.  It came as quite a shock when I realised this was 51 years ago, but happily I retain my good looks! 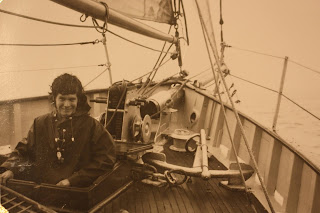 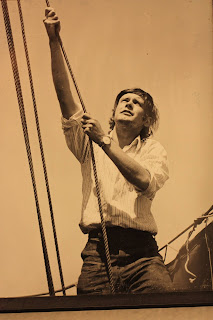 A teenage Killy on the Equinoxe 1970 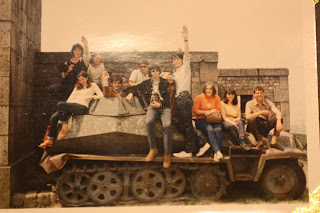 My fellow crew members at Cherbourg.  All good kids.

Last week Sam and I visited Cresswell, East Chevington and Newbiggin.  The day began rather damp and misty, but quickly improved so that we were soon in the sun.  It was good to see the water level at Cresswell Pond low and thus there was plenty of birdlife.  I had thought we would have the hide to ourselves, but it was full.  It was nice to chat to a Scottish couple down here on holiday.  They had been Munro baggers in years gone by but the walking has become too tough.  Join the club I thought.

I got my eye on a large female Sparrowhawk standing in front of the reed bed which everyone else had missed.  One guy just couldn’t find it in his binoculars and it eventually flew off without him seeing it.  A young Marsh Harrier flew for some time over the fields to the west of the hide.  Waders included 2 Greenshank, Avocet, Oystercatcher, Lapwing, Golden Plover, Dunlin, Redshank, Curlew, Bar tailed Godwit, Black tailed Godwit and Common Snipe.  There was a Pink footed Goose amongst the Greylags and a Barnacle Goose amongst the Canada Geese.  Little Egrets were present and duck species included growing numbers of Wigeon.

We had a good sighting of a Spoonbill feeding at Druridge Pools and at East Chevington Great Crested Grebe, Little Grebe and Ruff were present, but these two areas were generally quiet.  We made an ice cream stop as we passed Cresswell on our return.

Newbiggin provided a skein of Brent Geese flying north, and other birds included a Black Guillemot briefly seen by Sam.

It had been good to be out and about with some good birds seen and still quite a bit of botanical interest to note.  My boots are safely put away in the cupboard until the next outing and my mind remains intact. 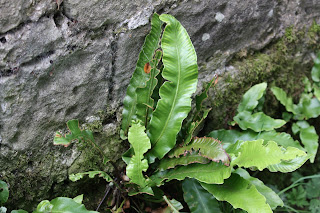 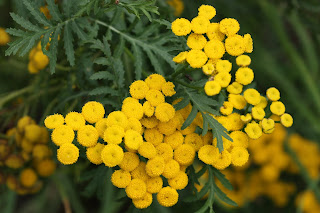 Tansies also on same path
Having watched so many Guillemots and Razorbills just off the shoreline it is not good news to hear that they are being washed up dead in large numbers on the east coast.  It seems uncertain as yet what the cause is for what appears to be starvation and unusual behaviour in that some have been found miles upriver.  Harmful algal blooms affecting the food chain has been one possible explanation.
Posted by Killy Birder at 06:28