A Return to Lindisfarne

No man is an island,

Every man is a piece of the continent,

A part of the main.

Islands have a significant effect upon the minds of many visitors, which can only be described as spiritual.  I do not use the term spiritual in a standard religious sense, although no doubt religious feelings play a part with some folk. My own spirit is touched by the light, the nature, the history, extensive skies and seas and often the community spirit.  I feel sure that Martin Martin will have had similar feelings during his tour of the Scottish Western Isles in 1697 and 1699 especially on his arrival at St Kilda.   Martin Martin later wrote A Description of the Western Islands of Scotland describing his experiences on the islands and incidentally, wrote early descriptions of Scotch Whisky.   Samuel Johnson and Boswell took a copy of Martin’s Book with them on their own tour of the islands.  I have no idea if this included the descriptions of Scotch Whisky, but I feel sure they will have tasted a variety of malts during their trip as there were not averse to a tipple or two.  More recently we have had TV programmes of visits to the Isles by Chris Packham and Ben Fogle, both of whom seemed spiritually moved by the trips.  I suppose the more cynical reader may say that in their case they were handsomely paid to be moved. 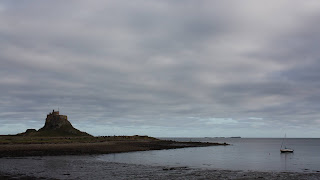 Sam and I made our return this week, and in our case it was to Lindisfarne, arguably not a true island at all, but for all intents and purposes it is, and it does certainly have that island feel.  In my mind Lindisfarne is every bit of an island as say Skye, which has its road bridge to the mainland.  I certainly had my spirits raised by the visit despite us not being alone.  Cars filled the causeway at times and the carpark was heaving.  Northumberland council must make a fortune at £7 to park for the day.  It’s just a pity they don’t spend some of the cash on filling the potholes in the field.  It is an exorbitant charge in my view.

We had stopped at Budle Bay on the journey north and found some good sightings in the bay including flocks of Brent Geese, Barnacle Geese and Pink footed Geese, along with large numbers of Shelduck, Shoveler, and Wigeon, a couple of Little Egrets, Lapwing, Oystercatchers, Grey Plover, Dunlin, Redshank, Curlew and Black tailed Godwit. Two or three Kestrels had been seen on the drive during which the rain had fallen as a constant drizzle, but happily stopped as we approached the coast and was felt no more during the day. 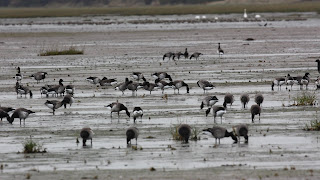 We got our eye on Brent Geese close to the causeway on the mainland side, so pulled in to take a good look.  A Greenshank was heard flying in and it gave an excellent sighting on the opposite side of the causeway.  I doubt if many of the car passengers crossing to the island gave this wonderful bird a second, or even a first glance.  It was my bird of the day without doubt.  Greenshanks evoke thoughts of wilderness areas in my mind.  I remember the excellent book written by Desmond Nethersole Thompson after forty years of studying this species in Scotland.  I remember views on Desmond vary and are not all good ones, not least because of his egg collecting and opinionated views.  In my opinion any man who shows the passion for birds that Desmond had, along with the determination to study a species f. forty years is an alright guy, despite the faults.  Redshank and Curlew also approached as we watched the Brent Geese.  We moved on to ensure getting into the carpark. 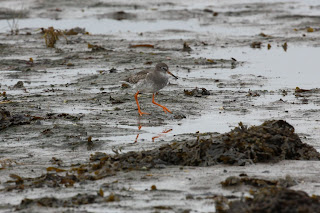 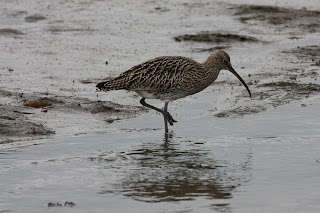 Curlew
It was the Lonnen we made for first, not least because this is where the Red eyed Vireo had been recorded.  A rare vagrant from North America and one which would prove to be a lifer for us both.  The area around the farm held numbers of House Sparrow, sadly seldom seen or heard these days, although thankfully still visiting my garden.  Redwings flew overhead, some of them lifting from an ample supply of berries along the hedges.

It was not too long before we had a decent if brief sighting of the very active Red eyed Vireo.   During our watch we had chatted to several birders all targeting the same bird.  More than one person pondered upon what would become of this bird.  Pleased though I was with this sighting it comes only third on my birds of the day list, although I am pleased to add it to my life list.  The Greenshank and Brent Geese were not to be beaten.

The day was not one which offered a heavy fall of migrants.  We did find numbers of Roe Deer, Goldcrests, Wren, Chaffinch, Skylarks and Meadow Pipits.  Brambling was heard calling from afar, and Sam picked up the sound of Golden Plover before we watched them lift and fly murmuration style in good numbers.

Walking past the dunes and onwards towards the lough there were few birds to be seen.  A look across the sea did provide Grey Seal and several immature Gannets and Shag.  Our minds turned to unnamed but attractive fungi, remains of Grass of Parnassus, the attractive disc like leaves of Marsh Pennywort and Spleenwort growing on the dry-stone walls.  Having reached the lough, we found it very quiet apart from good numbers of Wigeon, Mute Swans and Shoveler there was little else of note.  As we walked on towards the village a Kestrel atop of a post gave an excellent sighting, but just like it neither of us had brought the necessary lens to capture an image.  Lapwings called from the fields to our right and they were accompanied by a few Curlews.  Our final stop was at the harbour where we enjoyed an ice-cream.  Ringed Plover, Grey Plover, Dunlin, Redshank and Bar tailed Godwits were seen here.  In the channel behind we watched Red Throated Diver, Guillemot, Eider Duck, Cormorant.  Pied Wagtail picked at the sea weeds. 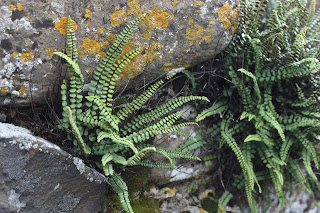 We walked back to the car well pleased with our excellent day on atmospheric Lindisfarne and having managed to avoid the crowds.  I treated myself to a tub of comb honey which was expensive at £6.50, but not daylight robbery as was the parking charge!

Having decided on having a meal on the way home we found most places packed and neither of us fancied fish and chips today.  We finally found space at the Masons Arms in Warkworth.  I’d almost fallen asleep in the car so a very nice meal served in a nice atmosphere by very friendly staff woke me up.  Our desert was another ice-cream.  Hey, come on, you must live dangerously sometimes.  Having not walked so far for quite some time I began to stiffen up but a hot bath prior to my head hitting the pillow worked wonders.  Life felt normal, and long may that feeling last.