Evening Walk on Patch and More

We left the road and walked through the gate onto the old wagonway, the ground here hard and bone dry.  The chill north wind suggested winter months, but the ever-increasing amount of Hawthorn blossom and bird song confirmed that it was mid-May.  Two Yellowhammers flew from the bushes and across the fields as a Whitethroat burst into song from the same area. 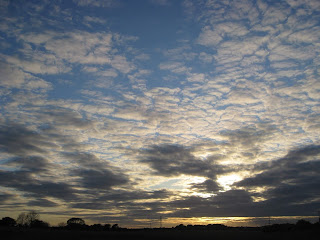 As we walked on the predominant sound was from numerous ascending Skylarks, and Lapwings with nesting sites across the open ground, some    guarding chicks, some sitting on nests and one pair seeming to be taking part in display flight.  Aptly named pewit, these birds are incredibly attractive, and thankfully I noted that this evening they were not being harassed by corvids.

I said to Sam that I was determined to find Grey Partridges this evening, and we soon did, unfortunately the bird in question was found freshly killed in the field having suffered an attack by a predator. 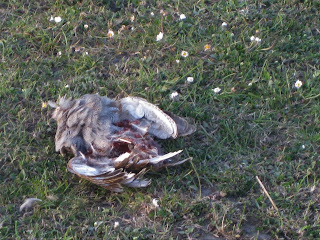 That Grey Partridge is dead!

Linnets called and flew by us, as Blackbirds and Wrens sung clearly and loudly from the hedgerows.  It really was cold as the sun dropped in the west and I was glad to have been dressed in winter clothing.  Swifts were sighted in front of us.  Although this area is farmland it is worked with some thought for nature and the path in places was lined with wildflowers including Cow Parsley, Charlock, Daisies, Buttercups, Red Clover and Vetches.

There is some wonderful habitat in this area and we took a diversion along a pathway which I had not ventured along before.  This is deserving of more exploration in the future.  Wood Pigeons were numerous, but there is every chance that much more in the way of other birds and wildlife could be seen along this route.   It is so sad that this area is going to be lost to house building soon.  I think John Clare would have simply called those responsible for this, clowns.  I would use a stronger description.  We returned to the wagonway and wandered through some area of untidy but interesting buildings.  One building in particular interests me, as it has a look of great age.  Goldfinches were in area.

We decided that we would retrace our steps rather than walk a circular route, thus having a more peaceful time.  A Willow Warbler gave out its gentle song and Grasshopper Warbler was heard, if somewhat briefly.  We took up a position beside the hedge way and chatted and waited.  Skylarks were still singing, Lapwing calling, and in the distance the calls of Grey Partridge and Pheasant were also heard.  Yellowhammer song underlined the size of the population of this species in the area this spring.  Bird song surrounded us all evening.

The skyscape had been special tonight, and as we stood chatting and waiting the sun eventually dropped completely out of sight below the horizon and the sky turned a deep shade of pink. I have missed such sights of late.  Darkness was soon to come.  We had been on a quest and it had proven successful, so our spirits were high as we wandered back towards home.  A little knowledge and a good deal of patience had paid dividends.  I did eventually see Grey Partridges, but it was the clear loud calls to one another across the field that I most enjoyed. 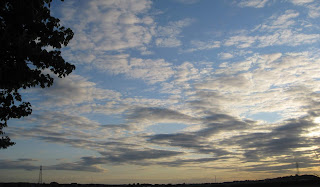 By the time we reached the silent and unused road again darkness was upon us.  We strolled on taking note that the aromas from trees and plants in the cold clear air, were especially strong tonight.  We agreed that this was an evening on patch surpassing any we had experienced before.  Arrangements were made for a return.


As I took my solitary walk home through the estates, there was an eerie feeling in the darkness, as it was so quiet with no one else about and no traffic moving in the streets.  I had been careful to put my binoculars away in the bag, as If stopped by the police I was sure they would not believe I had simply been birding! 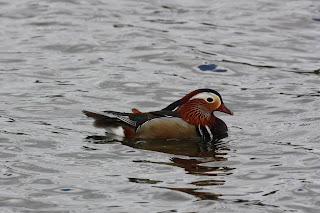 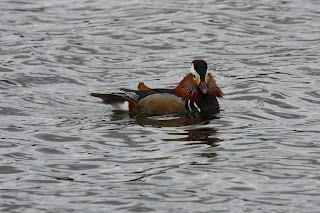 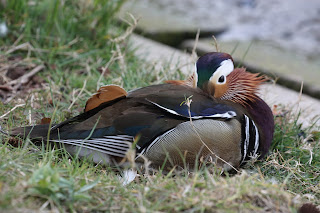 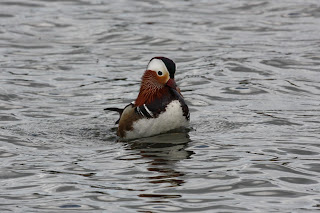 
16th May.  The atmosphere down by the lake during a sunny afternoon was vastly different from the quiet evenings out on the wilder area of the patch.  Lots of people out to take their exercise, several taking an interest in the birds on the lake.  I was down there because Sam had alerted me to the Mandarin Drake.  I cut my lunch short, left the dishes and got down there fast.  I found the Mandarin resting and the grass verge at the edge of the lake and later watched it close by on the water.  We chatted at distance to an elderly couple and we were pleased to be able to point them in the direction of the Mandarin and the Whooper Swan, ringed the day before, that remains on the lake. 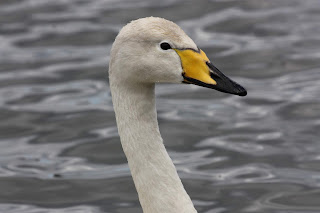 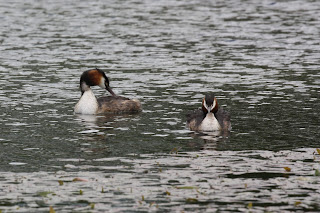 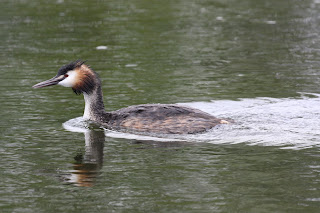 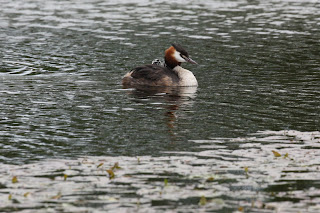 Great Crested Grebe.  Two young can be seen on back of adult.  (lower image)

One of the lakes Terrapins was seen.  Yes correct, they are not native to Killingworth.
I made for home to rest before another evening out by the hedge.  It has been a rewarding week out on patch.  Remember, you don’t need to travel far for good birding opportunities. 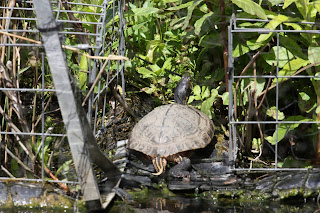