The recent balmy days of spring had vanished to be replaced by an increasingly cold northeaster, cloud which grew greyer and darker as the day progressed and a chilling air.  Bird sightings did make up for any discomfort and as all weather birders we were dressed for action. 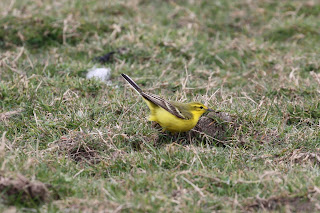 If any of our spring arrivals deserves to be seen in warm bright sunlight, the Yellow Wagtail must qualify.  Unfortunately, it was under leaden skies that we watched this stunning yellow species showing well in front of the hide at Druridge Pools. 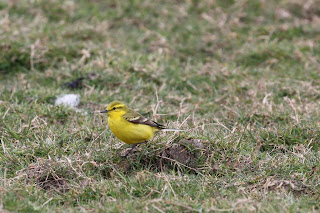 On our journey northwards I suggested that we take in Castle Island.  My suggestions occasionally bring rewards and today we were to find two Little Ring Plover on the sand bank.  Behind us we had the song and calls Blackcap, Common Whitethroat and Chiffchaff as numerous Swallows fed over the river.  I didn’t pick up the Sand Martins, but they were there in smaller number.  A Common Buzzard was being mobbed by corvids in the distance and a Common Sandpiper was seen on the sandbank.  As we left the area I had two thoughts in my head, first one was that it was much colder than I had expected, although the rain had stopped, and secondly we must try and find out the origin of the name Castle Island.

Our next short stop was at the southern of the Woodhorn Pools.  I had not visited here for a long time.  We found our first of the year Sedge Warblers here and watched Common Whitethroat.  Two Lesser Black-back Gulls were also seen,  After a chat with fellow birders, we set of for Cresswell.  As we passed the Drift Café, the carpark seemed quite full but no one perhaps understandably was sitting outside.  A Barn Owl was seen hunting at first close to the road and not at all put off by people and cars.  It was mid-day so maybe there are already youngsters to feed or maybe the weather conditions of last night had not allowed flying.  When we parked up we watched the Barn Owl at distance.  Meadow Pipit and Linnet were near to the parking area.

We walked to the hide, but didn’t enter.  Tree Sparrows had been seen near the farm buildings and although the pool seemed quiet, sightings included Black-tailed Godwits, Redshank, Oystercatcher and Avocet.

We had a break for lunch at the northern end of the pond before watching more Avocets, seven I seem to remember so they seem to be into double figures here.  We felt it strange that these days we take these birds for granted in Northumberland when only a few years ago they would have caused much excitement.  A lovely bird.  We made off towards Druridge pools.

We were soon listening to Willow Warbler and more Sedge Warblers, Chiffchaff and Common Whitethroat.  Sam picked up the more distant reeling of Grasshopper Warbler.  We found a lone late Pink-footed Goose, perhaps injured among Greylag and Canada Geese.  The air was full of Sand Martins and fewer Swallows.  Black-tailed Godwit, Lapwing, Ruff, Redshank, Pintail, Wigeon and Teal were amongst other birds seen. 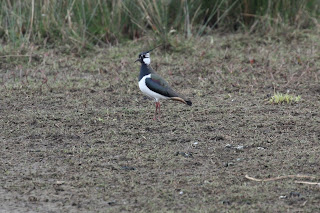 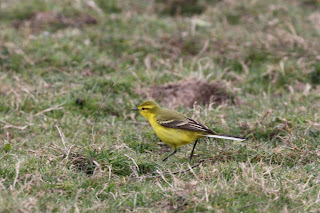 Yellow Wagtail
A stunning male Stonechat was seen in pristine condition whilst we moved to the farther hides.  This was where we had the good sighting of Yellow Wagtail.  Eventually a pair of Garganey showed themselves at the edge of pool as they dodged behind sedges.  I think we agreed that this was our sighting of the day, not least because we see this species so rarely.  I understand from birders we had earlier spoken to that there are two pairs of Garganey present, but we only found the one pair.  Two early low flying Swifts flew above our heads.  I have recently ordered a rather smart looking and newly published book about Swifts from Little Toller, The Screaming Sky by Charles Foster.  A Kestrel was seen near the wood. 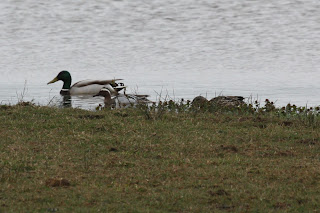 Garganey.  Size can be seen next to Mallard.

We made off again, this time to East Chevington where a potholed road has been rather poorly and patchily repaired.  The rain began as we made the journey.  It got heavier as we arrived so we chatted in the car as the rain got heavier.  As chilled (in both senses) all weather birders we decided there was only one route to take here, and that was the route home!

Despite the decline in the spring weather, we had enjoyed a really good day of birding with some unexpected sightings.  Our species list was 60+ without really trying.