In Pursuit of Spring

It was March 1913 when writer and poet Edward Thomas set off from his home in Clapham to walk westwards to Somerset in pursuit of spring.  The book that describes his journey and his gradual finding of the early signs of spring became a classic of English literature, and although that work will not be to everyone’s taste, I found it to be an excellent, refreshing and relaxing read.  I was reminded of Edward Thomas and his pursuit yesterday, as we slowly wandered in relaxed mood around part of the patch.  Spring has of course yet to arrive, but it was one of those mild bright days that suggest winter will not be with us forever.  I must confess that even as someone who enjoys the crisp clear days of winter, I don’t ever remember looking forward to the coming of spring with quite so much intensity, nor feeling the depressive effect of bitter and dismal dreary winter days so acutely.  Edward Thomas found that these teasing mild days are often followed by wintry spells and I’m sure we have some of those still to come, but best to enjoy the good days while they are here. 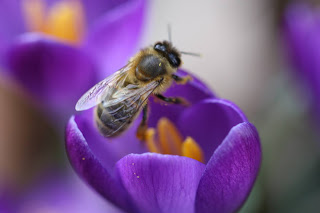 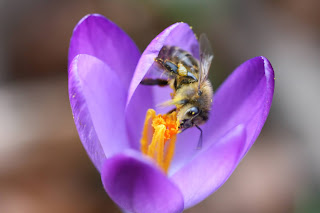 Honeybee on Crocus
Insects were about in some number and bird song was beginning to fill the air as we checked out trees again around the area of the village.  The birdsong that was most noticeable was that of the Song Thrush and Robin, with one or two Wrens in full song too.  A Great Spotted Woodpecker hammered away high in the trees of the church grounds.  Bullfinches were heard occasionally about the area, but sadly none in full song, and both Greenfinch and Siskin flew above our heads.  Mistle Thrush was heard and seen and a small number of Redwings were also recorded. 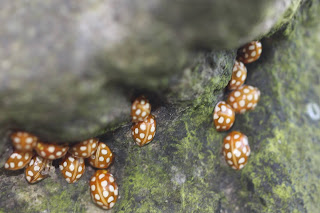 The crocus and snowdrops were attracting insects and a notable sighting was what I believe was a Honeybee visiting the crocuses.  There was a scent of spring in the air, stemming from the earth and plant life beginning to show.   The dormant Orange Ladybirds that we had found recently on the gravestone had disappeared, but Sam had been given information on more to be found on another gravestone and these were quickly detected, all fifteen of them.  The Orange Ladybird is expanding in number now that it has adapted to Ash and Sycamore trees of which there are plenty in this area.  I have noted that this species of Ladybird thrives on white powdery mildew that forms on leaves and may feed on small aphids.  It did go through my mind that if I were to focus attention on a small area of our patch, the church grounds and the immediate area that adjoins it would be a good spot to choose.  I intend to keep watch here throughout the seasons, more so than usual. 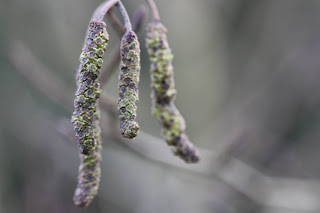 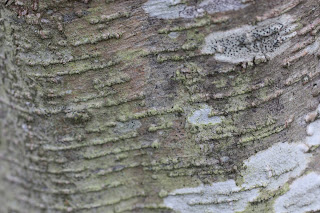 Bark of Alder
We spent a good deal of time checking out the trees and examining their buds and other aids to identification.  I am making a little progress!  Two species given particular attention were Alder and Hazel.  Both Monoecious, that is bearing both male and female flowers on the one plant as opposed to Dioecious where there is distinct male and female plants.  The tree pollen was certainly abundant when we shook an Alder branch.  We had to clean the pollen from our clothes.  Alder has an important symbiotic relationship with nitrogen fixing bacterium which is found in root nodules.  The bacterium absorbs nitrogen from the air and makes it available to the tree, which in turn provides the bacterium with sugars, which it produces through photosynthesis. 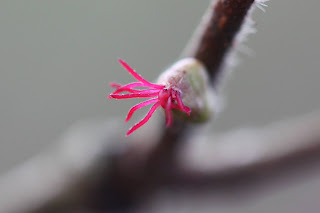 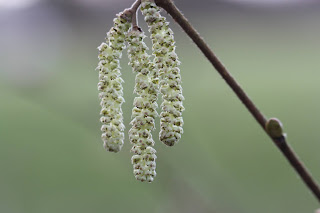 We looked at many other species of tree before setting off towards the lake. 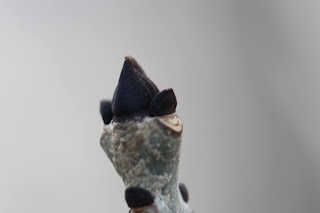 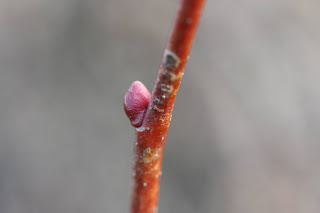 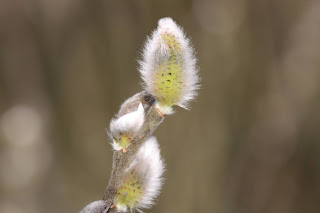 Bud of Goat Willow
We have both watched Great Crested Grebes on the lake for many years and know it is about this time of year when they show up.  Having said that we have found that in recent milder winters these birds often stay throughout the year leaving only if the lake freezes over.  Happily, we were able to watch a Great Crested Grebe in perfect breeding plumage as it called to attract a mate.  We only saw the one bird, however that is not to say another wasn’t hidden in the reeds.  There will certainly be a pair showing soon and that will no doubt bring another harbinger of spring, the photographer!  As we watched the Great Crested Grebe, calls were heard calls from Little Grebes.  Look here if you want to see some fine images taken by Sam of Great Crested Grebes.  https://www.wildintrigue.co.uk/urban-wildlife/close-to-home/ 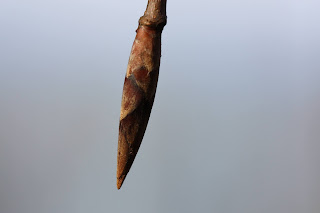 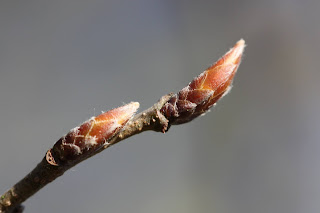 Bud of Hornbeam (Fastigiata)
Three Oystercatchers, now regulars at the lake, were calling in amongst the many Canada Geese, and many Goldeneye remain. 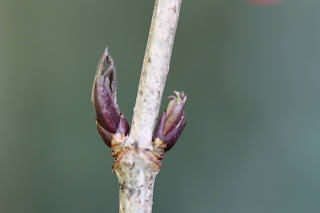 We had walked for three hours without covering much of a distance, so won’t be out doing Edward Thomas, but nevertheless we had seen much of interest on what was a wonderful quality day.