As we once again drove over the causeway to Lindisfarne and passed the flock of Brent Geese that were remarkably close to the road, we dared dream of a good autumnal fall of birds to greet us.  We were not to be disappointed. 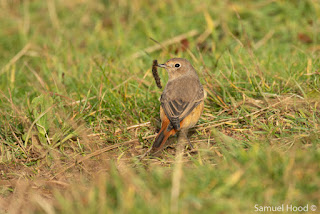 A stop was made at the Snook and the first bird to greet us was a cooperative feeding Redstart in the carpark.  Was this to augur a good day?  Our walk to the cottage plantation and garden was to be rewarded by a fine Red flanked Bluetail showing extremely well.  Only the second one I have seen in Northumberland.  On reflection not quite up to the standard of the sighting we made of this species in breeding plumage in the forests of Finland, but certainly closer and proving to be our bird of the day.  The plantation and garden provided quite a spectacular bird display and species seen here also included Blackcap, Willow Warbler, Chiffchaff, Song Thrush, Redwing, Blackbird, a flock of Linnets, Skylark, Meadow Pipit and more Goldcrest and Robins than you could shake a stick at.  Our wander around the area suggested there were Goldcrests and Robins to be found in almost every bush.  I also remember a Common Snipe. 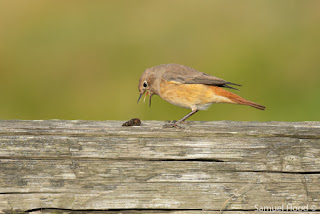 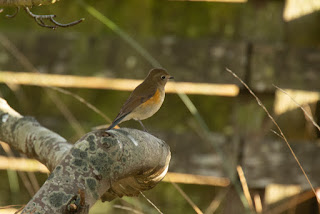 Red-flanked Bluetail
After parking up on the island, we made through the village to the Vicarage Garden which was being watched by numerous birders.  The first bird I saw in the garden was Spotted Flycatcher.  Even better, the Red Breasted Flycatcher also showed well eventually, and was a lifer for Sam.  A bird he has long coveted on his list.  Brambling and Yellow Browed Warbler were also seen, these latter two species perhaps both reaching double figures as seen and heard species by the time we had left the island.  By now we had also watched a large skein of Barnacle Geese and the large flock of Golden Plover in the air.   At one point someone mentioned that the Little bunting had returned and there was a mass exodus of fast-moving birders.  We decided to be more nonchalant about it all and eventually made off in the opposite direction to the herd and even stopped for a drink and piece of cake in the village having passed more Brambling, and calling Yellow Browed Warblers and of course the ever present Goldcrests and Robins.

We were soon on the lonnen watching Redwings and our first Fieldfares of the autumn.  Even better was sighting of two Redstarts along the base of the hedge.  Everyone else seemed to have only Lesser Grey Shrike on their mind and were hurrying along the lonnen in chase, so we had these Redstarts to ourselves.  We took it more slowly and watched Merlin and Short Eared Owl as we ambled along.  We still had sighting of the Lesser Grey Shrike, if a somewhat distant view.  This was a UK first for both of us.  Still the Goldcrests and Robins kept on coming.  A family of Stonechats were on the bushes as we chatted to another birder keen to find the shrike as it would be his first ever shrike of any of the species. 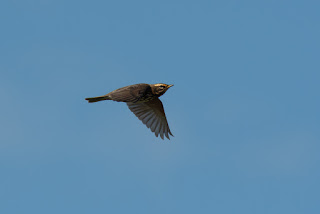 We followed the path that we had taken on our visit to the island a couple of days before, when there had been no sign of a fall of migrant birds.  We had sighting of a family of Roe Deer who appeared to have little fear of our presence.  We had eaten our lunch by the Lime Kiln remains, some birders seeming to wonder why we weren’t up there trying to find the shrike.  Most seemed to find the bird but few seemed to get anything but a distant sighting.  The Carline Thistle didn’t look quite so good after the soaking of the previous day.  As we moved from the area we had a nice sighting of a female Great Spotted Woodpecker, as mentioned in my previous blog, an irregular bird on the island.  Kestrel was seen at some point and both Grey Heron and Reed Bunting were seen nearby. 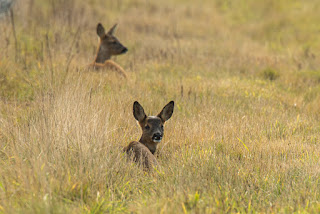 We eventually made a return to the Vicarage Garden and ended our visit with even better sightings of Red Breasted Flycatcher and Yellow Browed Warbler once again.  We made off from the island in plenty of time to beat the incoming tide, and once again passed the Little Egret feeding near the causeway.  Pink footed Geese were seen as we drove down the AI.

We didn’t see all the rarer birds involved in the autumnal fall, but we did thoroughly enjoy the hours we had spent on the island and in the main, the species we did see (and we saw most of them), we saw very well.  I know neither of us would have enjoyed the time had we chased after birds to increase our list, as that is simply not our style.  We enjoyed talking to many fellow birders today, all enjoying themselves in the manner that suits them.  I must give special mention to the lady who lives in the cottage on the Snook as we had an enjoyable and long chat with her and she made us and other birders feel welcome.  Also, a special mention is owed to the friendly couple from Craster who approached me and said, ‘you must be Brian?’  My first thought was, good grief what have I done? Ha ha.  I needn’t have worried as they were regular readers of my blog and had recognised Sam.  We will simply have to live with the fame I suppose.

Hope everyone had as good a day as we did.  The first bird I saw on the lawn when I arrived home was a Robin and I believe Sam saw Goldcrest!  Classic Day.

ALL IMAGES COURTESY OF SAMUEL HOOD.