Highlights of an Autumnal Day

Before we had even left Killingworth we had a close up sighting of a Common Buzzard flying over the estates, and as we drove along the Beehive road we passed a Short Eared Owl in flight over the fields, being mobbed by corvids.  So, a nice start to our trip out.

I have eventually got round to reading Benedict MacDonald’s Rebirding and his co-authored follow up Orchard.  The latter included a description of the garden/orchard in Hungary at the property at which we had stayed six years ago (blimey how time passes), thus giving this a very personal feel.  Both excellent reads but at times depressing when considering the wildlife lost from Great Britain, not only in recent decades, but over the centuries.  I am not sure I view all the suggestions for rewilding as achievable, certainly not without a major change in attitudes to the great majority of our inhabitants.   Nevertheless, I am all for positivity, and in thinking big maybe positive changes can be made on a large scale.  One point I certainly concur with, whilst I understand the restraints upon organisations involved with conservation, I also note a rather weak approach from them at times, so a kick up the backside may be what is required to ensure they act with the interests of wildlife at heart, over and above the attempts to please everyone.

Thankfully, we still have good chances to watch wildlife in our region and I gave a short account of two recent experiences.  Both instances simply recall experiences easily achievable on our doorstep.  Building back better, whatever that means, ought to include a relook at how our country is managed for nature.

Brier Dene proved to be generally quiet during our walk although the call of Yellow Browed Warbler was among what we did encounter.  I am all for stopping in one spot and letting birds come to me and we experienced that today.  In a rather decayed area of the dene we got our eye on a Willow Tit that showed several times.  Waiting around a while it wasn’t long before we were also watching several other species in this one tiny patch of the dene as a Chiffchaff was heard in the same trees.  A male Bullfinch in pristine condition and glowing colour appeared, as did an equally colourful Grey Wagtail.  A male Blackcap arose from the burn and showed well along with Song Thrush, Blackbird, Chaffinch and tits.  Behind us a Peacock Butterfly showed off its stunning colours as it bathed in sunlight, perhaps before finding a suitable spot for hibernation. 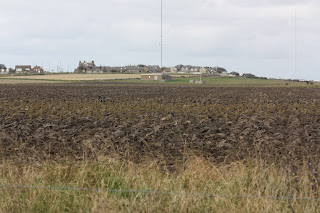 At this point only an area of colour.

Later, as we approached St Mary’s Island we watched a flock of Golden Plover in flight.  Walking further and passing the ploughed farmland a patch of xanthous colouring stood out in the now murky light.    A closer look confirmed that this was indeed the flock of Golden Plover which could so easily have been overlooked, and no doubt was by many passers-by.  Each bird a wonderful golden colour, the dullness of the light enhancing the plumage colouring and making the large dark eyes of each individual bird show prominently in a wonderful atmosphere.  The mass calling of the flock was barely audible and in the growing gloom seemed almost melancholic.  There was much movement of individual birds within the flock which seemed unsettled and ready to lift at any point.  On scanning the area closely more and more shapes of Curlew were also picked up, although well camouflaged in the dimness and against the dark of the mud coloured earth.  Lapwings were the first birds to lift in that slow lapping flight that is so recognisable.  They were followed into the air by a few, then the whole flock of Golden Plovers and with them a small number of the Curlews. There were soon myriad birds in the air and way above them another flock of Golden Plover.  Adding to the mass was a mini murmuration of Starlings appearing like a drifting magic carpet of dark smoke curved shape.  A few Linnets by the side of the road also lifted as if in synchronisation with the flocks behind them and a Grey Heron entered the stage.  Just as quickly as lifting, the birds once again dropped to the ground.  Natures magic moments such as this ought not to be missed and once again we were rewarded for simply standing still and watching. 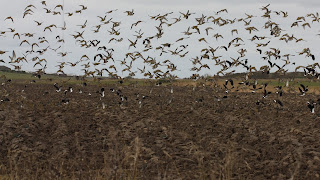 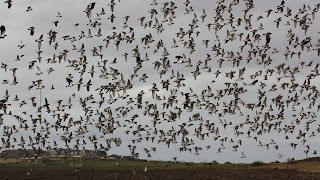 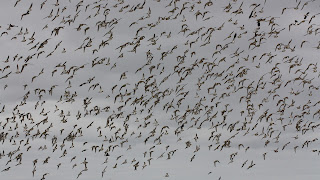 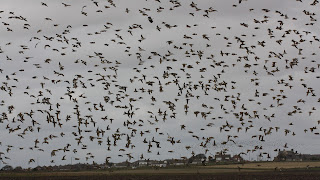 Murmuration of Starlings begins to collect in background
The whirr of Starling crowds, that dim the light

With mimic darkness, in their numerous flight.

Apart from the few confiding Goldcrests in the hedges of the reserve, few other bird species took our attention today. Nevertheless, a good few hours spent watching our local wildlife and their extraordinary behaviour.