Jul/Aug 19.  We begin with a quiz.  Can you name the newspaper responsible for the following headline on the internet?

Rare Painted Lady Butterflies are spotted across the UK for the first time since 2009 as they begin their once in a decade migration.

Yes, yes, you all have it correct.  It is of course the Daily Mail!  Three errors in one sentence implies a teeny-weeny bit of lazy reporting, and I use the term reporting deliberately rather than journalism.  To be fair, the article did include photos of butterflies and surprisingly they were Painted Lady Butterflies.  However, it is little wonder a great many of the population of the UK remain ignorant on the facts of the natural world when we have headlines such as this.  For the record, for anyone not au fait with butterflies, the Painted Lady is not a rare butterfly, it appears in the UK each year (this year just happens to be a bumper one) and it migrates each year.  If you want to know more stay clear of Daily Mail reports!  There is plenty of more reliable information on the internet. 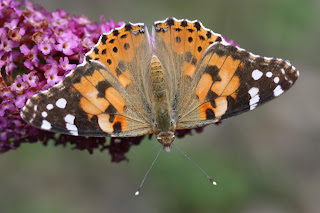 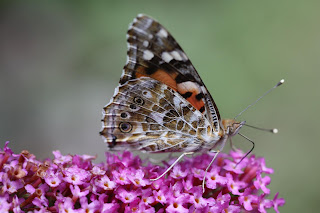 I’m sure many of you have been and still are enjoying the spectacle of the mass influx of Painted Lady Butterflies, the largest influx since 2009.  I believe the previous good year for this species prior to 2009 was 1996. 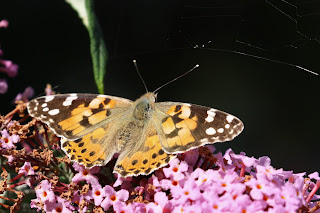 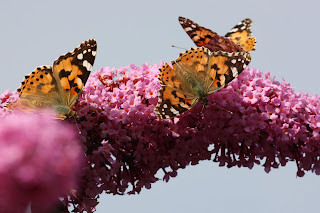 The Painted Lady Butterflies have been on my Buddleia for over a week now and whilst I don’t claim to have had 125 which reportedly appeared on a bush at St Abbs, nor the swarm that flew over the Farne Islands, I did have 15 of them at one time on a bush along with Large White, Small Tortoiseshell, Red Admiral and Comma.  This of course gave an excellent opportunity for photography and I thought I would share some of my images with you.  I certainly do not recall seeing so many Painted Lady Butterflies in 2009, but I didn’t have the Buddleia then. 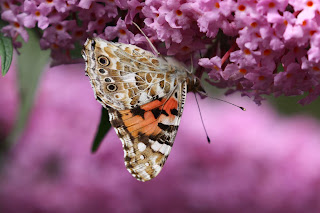 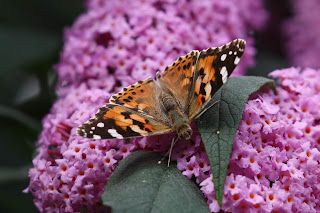 When visiting in North Shields I found several more (double figures again) of the species on another Buddleia.  This all gave me the chance to enlighten at least three people regarding the migration of Painted Lady Butterflies from northern Africa.  They didn’t seem as impressed with the feat as I thought they ought to have been.  In the course of another conversation whilst lurking at the Buddleia, I learnt that my neighbour had found a Hawkmoth in her child’s bedroom during the hot weather and I was a bit jealous of that and not having been able to photograph it.  From the way my friend’s hands were held apart I began to wonder if in fact, it had been a juvenile Pterosaur.  The lady’s partner also informed me that his brother is into nature photography, so that was pleasing to hear.  Two days before when temperatures were high and I stood burning near the garden, a swarm of bees flew directly above my head, thankfully not landing on it.  Don’t let anyone tell you that you must be in the countryside to enjoy wildlife and nature as it’s simply not true. 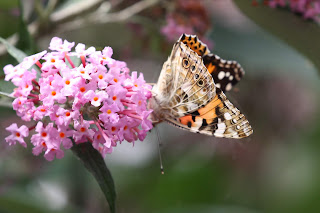 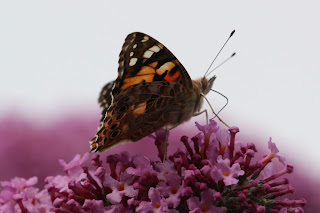 I used my macro lens for the first two images shown here otherwise they were taken with my 100-400mm lens whist attempting some variation to the resulting image.  The underwing of the butterfly is often as interesting to me as the upper-side and if taken with back lighting can often give the impression of stained glass (to my eye anyway) and if you have read my blog over the years you may remember that I have some interest in stained glass windows in particular. 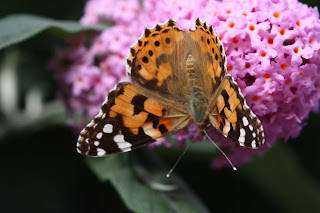 I have a collector’s copy of David Measures Butterfly Season 1984 and initially I didn’t rate the paintings too highly.  However, over the years I have come to appreciate that colour and movement expressed in paintings is as important, if not more so, than the expression of a detailed and  exact depiction of the butterfly.  Perhaps I can use that to explain some of my less than sharp images!

I know there will be many an image of Painted Lady Butterflies about at present, but hope that you enjoy the ones I have added anyway.