Sitting here typing with the heating once again turned up and snow on the ground outside of the window, the spring heatwave of last week’s seems a distant pleasure, but spring is here and we made the most of it last week.  The botanical interest was from various hues of yellow which were very much a reflection of sun filled skies.  Tall, cultivated Daffodils were very where, Coltsfoot formed a colourful blanket at Castle Island, Lesser Celandines shone like mini suns from the low grasses, Primroses were beginning to show opening flower buds under tree cover and best of all was the dense yellow flowering Gorse at Druridge Pools.  The air held numbers of Small Tortoiseshell Butterflies and the occasional Peacock Butterfly.  The sea was a calm mass of marine blue until hidden by the North Sea mist. 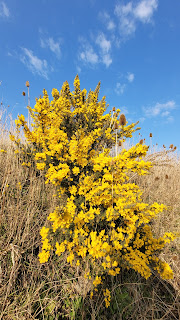 A calling Chiffchaff greeted us at Castle Island and we were soon watching three Little Egrets from the riverbank a species which will always excite me no matter how common they become in the area.  Lesser Black Backed Gulls were amongst the gull flock.  Certain gulls appeal to me and the Lesser Black Backed is one of them.  Grey Heron and Teal were among other birds seen here before we moved onto Cresswell Pond.

Before we reached the pond we enjoyed the sight of numerous calling Tree Sparrows.  The pond itself disappointed with the water being extremely high once again, a constant problem over the years.  We did manage to find three Avocet here and picked up Twite at the north end of the pond of which we had better sighting on moving north.  There was no sign of Wheatears.  We thought we might be entertained when a family of four found the crossing covered in water.  Child number two took off his shoes and walked across without falling in which was a disappointment, whilst for some reason child number one ran at the sheep (at least some of them carrying lambs) and chased them away, after which mam and dad followed and walked through the field.  I suppose spring heat brings everyone out!  Skylarks were singing overhead and Stonechats were seen.

Next stop was for a nice lunch in a busy Dinnington pub.  Sadly, my first Barn Owl of the year was a dead one on the roadside, feathers everywhere.  A similar plight of many Barn Owls, I know. 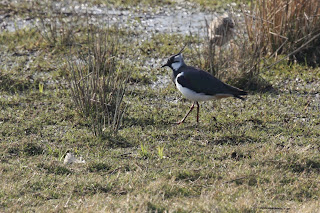 Druridge Pools provided four Ruff and Common Snipe among the other species which included numbers of Shoveler and Shelduck.  I regretted not taking the camera to the viewing platform as the Ruff were close up.  I went off for the camera and on returning the Ruff had moved having been disturbed by the noise of trail bikes.  Having reached the other hide, we found five other folks in it.  I can’t remember finding so many individuals in this particular hide.  We knew a Water Pipit had been recorded here but did not immediately sight one.  I got my eye on a bird on the edge of the water and quietly asked Sam who had the scope  if it was just a pipit i.e., a Meadow Pipit.  Before he had time to look and respond voices from both sides of the hide informed me ‘It’s a Water Pipit’.  The tone suggested that I ought to have known.  I’ve just finished reading Tim Birkhead’s new book Birds and Us in which he mentions Mark Cocker’s hierarchy of birding types.  I think the folk in the hide had me marked down as either a Dude or Robin Stroker of which I am neither.    I do think this bird today was the most obvious one I have seen in Britain as it was beginning to change into summer plumage.  I have only ever seen one in full summer plumage and that was in the Transylvanian Mountains in Romania many years ago which I admit at the time I had put down as a LBJ.  With hindsight I wish I had taken more notice of it at the time. 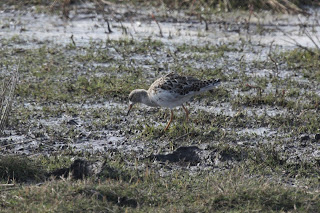 We looked over the sea from the dunes and Sam counted 46 Red Throated Divers.  They were accompanied by Common Scoter, Eider Ducks, Razorbill and Guillemot.  Sea mist was over the North Sea not too distant.  East Chevington proved to be very quiet but we did find a single Pink footed Goose in a small group of Greylag Geese.  Our last stop was at Dinnington pool.  We knew right away from the number of cars and photographers that we might be in luck with Short Eared Owls and it wasn’t long before Sam picked them up hunting in the distance accompanied by Common Buzzard.  It wasn’t long before we had a close up Short Eared Owl fly by.  A pair of Carrion Crows copulated in the tree behind us. 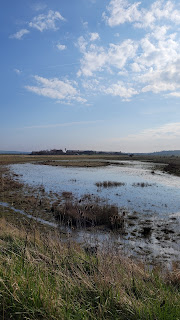 Overall, a good day with the Water Pipit and Short Eared Owls being birds of the day, with at least 66 species on the day list.  Today the snow, hail and cold continues.  Nowt like a good spring weather to cheer one up! 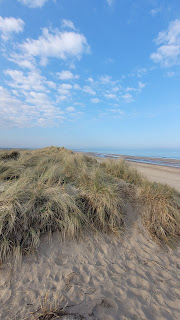 Incidentally, Tim Birkhead’s book is well worth a read.  Tim is an academic who can write informatively and interestingly for the general reader and he is certainly one of my favourite authors of ornithological writings.