Jesmond Dene, and Weird or Wot? 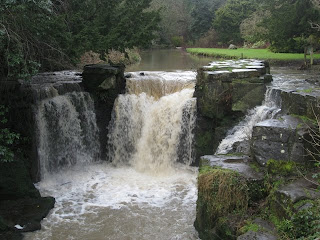 The burn was running fast today. 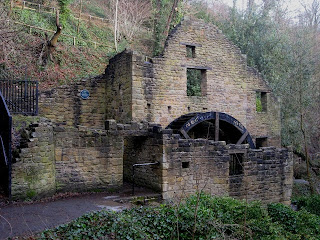 The mill on the Ouseburn

13th January. I’d set myself a target of five new species for the year list today. I thought the most likely new finds would be Nuthatch, Treecreeper, Grey Wagtail, Dipper, Kingfisher and Goldcrest. I know that’s six but I didn’t expect to find them all!

On my way to Heaton Park I was crossing Morrison’s car-park when I saw a flock of maybe a dozen birds flying about and I initially thought they were Siskins. I care not what folk think about me these days so I got the bins out in the middle of the car park. As I reached railway embankment some poor chap told me he thought I had been watching him. I’m not sure what he was implying and I didn’t ask. He told me he was watching for trains passing and was collecting numbers in his book. Weird or wot? No not me, him! Anyway we got chatting and it made identification of the birds a little more difficult. However I did get a decent look and they were a small flock of Redpoll. I can’t be certain if there was Meally in there with the Lesser Redpoll although with my recent experience I am suspecting there was an odd one there. Wouldn’t be surprising, with the vast numbers which seem to be about. Anyway I introduced the train spotter to a new bird and gave him some of the finer details. I hope he was impressed. He told me that watching the trains was a cheap way to spend the time and it also allowed him to socialise. I got off on my way before he had much time to socialise with me as I had those five species to find. I don’t have a problem with train-spotters by the way, nor the bloke in question who seemed a decent guy. I used to go across to the Central Station and further afield with my big brother when I was a kid, and still have books with the numbers in. I have friend who is into trains and even knew someone really into buses. When the Tyneside Metro was built he travelled from London especially to ride on it.

On entering Heaton Park I very quickly found Great Spotted Woodpecker and Sparrowhawk. A handful of Siskin soon followed and then I heard and then saw Nuthatch. New bird number one. I found three of four flocks of Long Tailed Tit today, along with Great, Coal and Blue Tit. It wasn’t until I was through Armstrong Park and into the dene proper that I found new bird number two. This was a pair of Stock Doves sitting in what appears to be used as a large nest hole. I’d forgotten that these were likely.

The water in the Ouse Burn was deep, fast and murky. I did eventually find Mallard and Moorhen. New bird number three was a close up Treecreeper. Then all was pretty silent. Jesmond Dene itself is not a great place to watch birds in my opinion, and if they carry on sawing down the trees at the rate they have been, it will be even less inviting. I remember being told last year that many of the trees are diseased and old. Seems sad that so many have to be sawn down. Perhaps thought might be given to replacing trees with natural species, after all £6,000,000 is being spent on this! I have my doubts on that one however.

I was beginning to think that three new species was how it was going to stay until near the end of the walk the Kingfisher turned up as I was looking up the narrow inlet for Dipper. The Kingfisher showed well in three flypasts and was new bird number four. Within a minute or two new bird number five appeared in the exact same area, and that was the Dipper. I later heard it and saw it fly up the burn. I came home happy. I’m hoping the train spotter had some joy too.