Elvis Costello sang of it being a good year for the roses, well in my opinion 2020 with all its problems so far has if nothing else, been a good year for the orchids.  Sam and I had decided that today was right to involve ourselves in a quest on the holy island of Lindisfarne.  It was to be a quest in search of Epipactis sancta, more commonly known as Lindisfarne Helleborine.  We hoped also to find along the way other wildflowers, including another of the genus Epipactis, the attractive Marsh Helleborine. 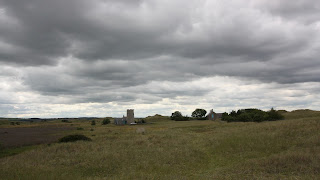 The tower and house on the Snook

We knew we could not take a sighting of the Lindisfarne Helleborine for granted even though we had timed our journey to hit its peak flowering time.  After all, there are very few specimens of this plant on the island, its flowering time is short and weather can affect the timing of this.  On the plus side we had time, enthusiasm and dedication.
We joined the string of vehicles crossing the causeway before 1:00pm, and judging by this traffic it seemed that the centre of the island was going to be heaving with visitors, modern day pilgrims I suppose.  Thankfully, we weren’t going to the centre, but rather our quest was to the western end of the Snook.  Often, we drive past this area in winter and head for our usual birdwatching haunts, when usually the island is less frequented by people. Although in any event, we find that most folk venture little further than the village and the castle.  I would say at this point, it is only by exploring the more remote areas of the island that you can claim to really know it.

With car parked on the Snook we ate some lunch whilst I thought of holy men illuminating books, Viking marauders, lime burners, farmers and fishermen.  It was dry and mild, but overcast with cloud which was to occasionally break during our time here and give wonderful lighting conditions and at times keeping us very warm.
Sometime after leaving the car we looked up to find that we had been so engrossed in identifying plants such as Sea Arrowgrass, Sea Plantain and Seaside Centaury that we had barely left the carpark.  We continued our walk westwards. 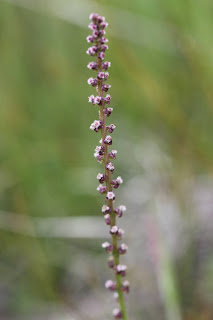 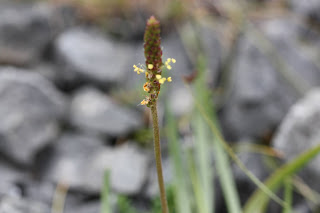 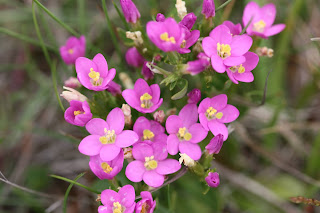 Various Orchid species were soon showing well, Common Spotted, Northern Marsh, Pyramidal and then Marsh Helleborines in numbers and then we found the elusive Lindisfarne Helleborine.  Our quest had been successful and we could now relax and just enjoy all before us. 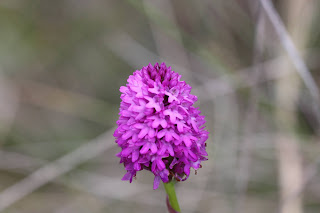 Pyramidal Orchid.  The best of many seen, growing in shelter of what appeared to be old World War Two defence structure.  Wonderfully lit, but I have not quite captured the beauty that I saw on the day. 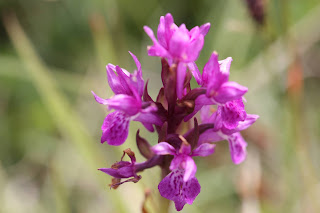 One of many Northern Marsh Orchids, and many were in much better condition but by now my mind was on Helleborines. 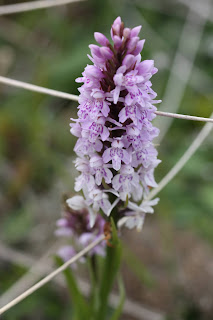 The Lindisfarne Helleborine was first recorded on the island in 1958 and at that time believed to be Epipactis dunensis, the Dune Helleborine.  It wasn’t until the turn of the current century that it was recognised as a species in its own right, and by some that it had even evolved separately from Dune Helleborine and its variety Tyne Helleborine.  Lindisfarne Helleborine is therefore endemic to the island.  In beauty it is not up to the standards of the Marsh Helleborine of which we found many, but it is always nice to see a rarity.  Nice also, was the chance to point out the plant to a friendly couple who we had got speaking to about other orchids.  Having left the carpark, all the other folk seen in the distance could be counted on one hand, so we had no problem with social distancing. 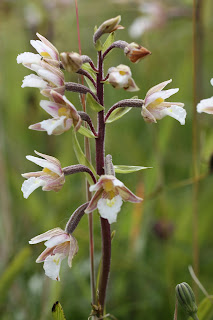 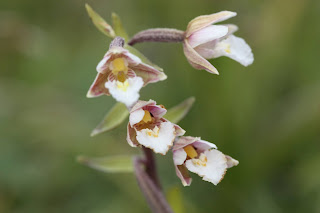 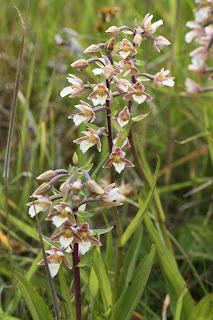 We didn’t ignore the butterflies and by now we had seen Small White, Common Blue, Small Heath, Meadow Brown and Dark Green Fritillary.  Bird watching today had no priority, but we did hear Sandwich Tern and see the likes of Kestrel and Meadow Pipit.  As I was sitting in the Dunes and picking off numerous heads of that damn invasive Pirri-pirri Bur we heard fly overhead what sounded very like a Bee-eater!  We didn’t see the bird so it will be one of those ‘’we’ll never know moments’’ but we have seen and heard many Bee-eaters on our travels in Europe and I trust Sam’s hearing skills,  if not my own at times. 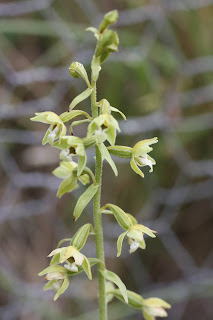 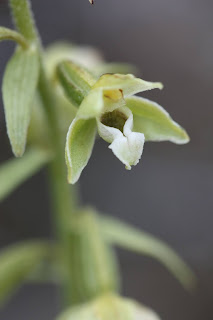 Lindisfarne Helleborine.  Not the most beautiful of orchids, but rare and interesting.

Walking further into the dunes we were well rewarded with plant species including the small Fairy Flax and the much large Vipers Bugloss.   We listened to the distant haunting calls of Grey Seals, and on our return saw many hundred laid out on the sands to the south of the island. 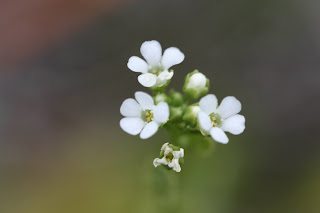 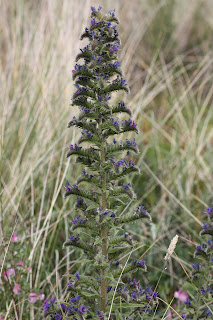 Looking out onto the long stretch of isolated sand it was obvious none of the crowds visiting the centre of the island were venturing far.  We saw only two people walking like matchstick men and women close to the sea in the far distance, otherwise it was completely deserted of humankind. 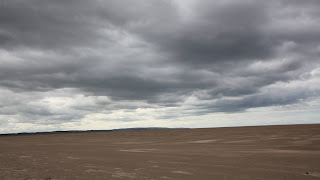 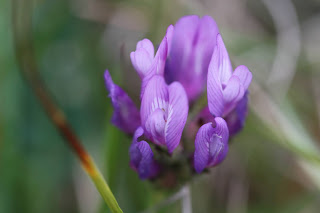 Thinking that there may be plants on the edge of the dune area where it meets the sand, on our return  we walked along this edge but found only grasses  and the stump of a tree, showing a face, partially carved we thought by human hand. 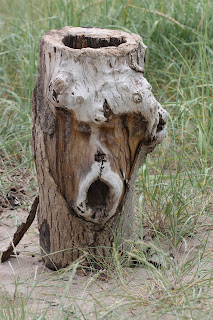 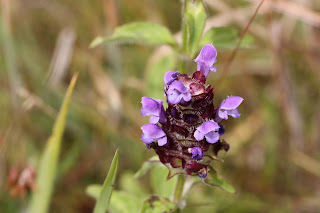 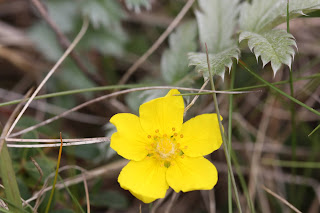 Eventually back at the car I struggled with the Pirri-pirri again, eventually finished off the remains of my lunch and we left the island to the masses and travelled south.
We made a stop at Bamburgh where we visited the grave of the Northumbrian naturalist and artist Prideaux John Selby.  Its rather lost and weathered next to the grand, rather over ornate Victorian memorial to Grace Darling.  I wonder how many tourists think she is buried here rather than some yards away.  The Victorians didn’t get everything correct, having built the original memorial in Portland stone it soon weathered and had to be replaced by a new one built with Northumbrian Stone. 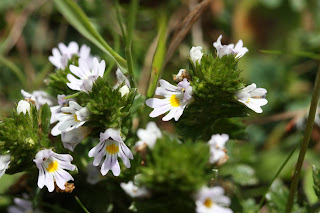 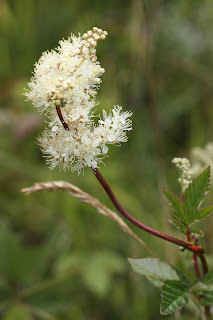 A second stop was made at Monk House pool where we recorded Common Sandpiper and saw Sea Campion, Harebelll and Meadow Cranesbill.  After a quick third stop at Sea Houses where the smell of fish and chips were enticing, but the queues were not, we set off for home having enjoyed a great day botanising.  Whilst talking of war poets we passed a nice grouping of Red Poppies which seemed appropriate.  Our quest was complete.

(All images taken on the Snook, Lindisfarne.  Remember to click on them to up-size)
Posted by Killy Birder at 11:30