Another Fine Day You Gotten Me Into

3rd Jan.  A skein of Pink footed Geese was seen soon after leaving home.  Kestrel and Common Buzzards were seen as we approached Budle Bay on another fine day with a clear sky and sun.  On arrival we found whistling Wigeon in numbers along with Teal and a high tide which we were able to watch as it receded at a fast rate, giving the bay an entirely different appearance.    Surprisingly these days we saw no Little Egrets but there were numbers of Brent Geese and Pink footed Geese in the field to the north.  Two Whooper Swans approached from across the bay and flew directly over our heads and a Peregrine Falcon was mobbed in the distance to the south as it flew inland.  Other new birds for the year list included Shelduck, Oystercatcher, Grey Plover, Ringed Plover, Dunlin, Curlew, Bar tailed Godwits and a Meadow Pipit.   Standing out of direct sunlight we eventually become quite chilled and eventually moved on to Bamburgh and Stag Rock. 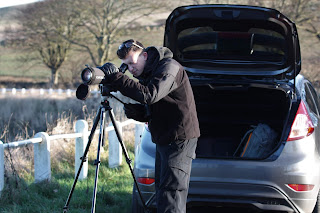 Although the sea was quite flat off Stag Rock we were not alone among birdwatchers who were not having much luck sea watching.  Initially only a pair of Common Scoter were seen flying northwards, a few Red Throated Divers, Shag and Eider Duck.  Moving our position a little northward, we soon picked up a sizable raft of Common Scoters which included with them Red Breasted Mergansers and nearby, more Red Throated Divers.  The first of several Stonechat were seen on the dunes and there were large numbers of Purple Sandpiper and Turnstone feeding on the rocky shoreline. 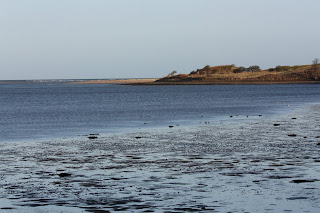 We ticked off Long Tailed Duck as we passed Monk’s Pond where we didn’t hang around long as lunch was calling.  Fish and chips at Seahouses of course.  Quenched and warmer we decided to make off for East Chevington.  The high lights on North Pool was a Great Northern Diver showing well at the north end of the pool and an Otter as it actively fed in the centre of the pool.  A good one to begin the year’s mammal list.  The likes of Pintail, Goldeneye and Little Grebe were also seen, the latter new for the list.  We chatted to some friendly fellow birders and we all had a good distant view of the Marsh Harrier perched on a post south of South Pool.

A stop at Widdrington gave nice sightings of Smew and Scaup before we moved off to Cresswell, spotting a Brown Hare running along close by the car.  Time at Cresswell was short, although we did find another Long-tailed Duck.  The short days meant that light had faded away by the time we reached Blyth so still no luck with Waxwing, but we’ve made the most of two grand days at the start of 2020.  So yes, another fine day with at least sixty-two species, thirty of them new for the year list.